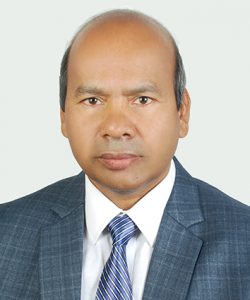 Dr. Shah from Golbazar-2, Siraha, Madhesh Province, currently living in Kathmandu, Nepal is a Senior Scientist at the Nepal Academy of Science and Technology (NAST). Dr. Shah completed his Ph.D. in Biophysics from the Department of Biology-Oriented Science and Technology, Kinki University, Wakayama, Japan, through a quite selective program of the Japan Society for the Promotion of Science (JSPS), as a JSPS RONPAKU Fellow in 2011. Being a former JSPS Fellow, he was invited to work as JSPS Bridge fellow in 2018 at the National Institute for Radiological Sciences, Chiba, Japan. He has been serving as a counterpart of four Technical Cooperation Projects of the International Atomic Energy Agency (IAEA) since 2012. His most notable contribution was made through a Project on External Radiation Dosimetry which ended dependency of individual monitoring of radiation workers on foreign countries since 2016. Currently he has been involved in the establishment of a Secondary Standard Dosimetry Laboratory (SSDL) at NAST which when upon installation will end another dependency of calibration of radiological devices on foreign countries. Dr. Shah is leading the nuclear research program in his country. In addition, he has been involved in several professional and alumni networks and has served as an Editor of couple of academic journals. He is constantly involved in both national as well as international conferences/seminars/meetings and has published about a couple of dozen scientific research articles in reputed journals.

Dr. Shah’s current project under the Fulbright Visiting Scholar program is on “Internal dosimetry for radionuclides distribution in cells and tissues” which aims at locating the site of exposure employing X-ray fluorescence microscopy on archival animal samples. It is hoped, when accomplished, it will bring a significant advancement in the efficiency and safety of therapeutic treatment of the humans who suffer from accidental or professionally exposed radiation. The knowledge imparted by the erudite team at NU will help in the advancement of this emerging technology in Nepal.