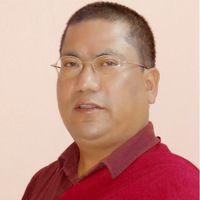 Dr. Bajracharya, who received his MA, MPhil and PhD in Buddhist Studies from Delhi University, has also coordinated and lead two International Buddhist Conferences organized by the Nepal Government. For the past eight years, he has been devoting his life to construction of a Newar Buddhist Monastery in Lumbini. He is also the linage holder and the leading Vajrācārya of Newār Buddhism(Vajrayāna). He had played a pioneering role in introducing the Buddhist Studies discipline in Nepal and in revitalizing Newār Buddhism. In respect to the works he has done in the community, after being awarded the Fulbright Scholar-in-Residence grant for the second time in 2019, he has been teaching Buddhism at the College of the Holy Cross College in Worcester, MA.